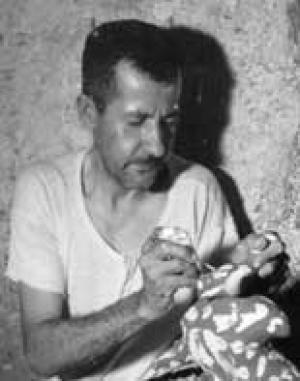 Vitalino Pereira dos Santos was born in 1909 in the village of Ribeira dos Santos, close to Caruaru, Pernambuco State. He was bred in a pottery environment, and was still a young lad when he began to make ox figures, miniature earthenware and other toys to be sold at the local market. He had a strong aesthetic sense and produced work that, in maturity, attracted the attention of art collectors and critics. In 1947, at the initiative of artist Augusto Rodrigues, who became his friend, he successfully exhibited some of his sculptures in Rio de Janeiro. This exhibition is today considered a landmark in the history of interest in folk art, not only because Vitalino’s work was shown to the general public, but it also attracted attention to the existence of this type of creative work in the different regions of Brazil. He is known as Master for his virtuosity and leadership among the potters in Alto do Moura. Between 1960 and the date of his death in 1963, he travelled all over Brazil participating in exhibitions and demonstrating his technique. Although famous, he died very poor at the early age of 53, victim of a contagious disease. His memory continues to be cultivated after his death both by the general public and his family and friends, many of whom he helped to train. Except for Maria José, his children – Amaro, Manuel, Severino, Antonio (deceased) and Mariquinha – followed in his footsteps. Master Vitalino created an expressive visual narrative about country and village life in Northeast Pernambuco. He would sculpt anthological figures, such as “pauper’s funeral"; "sea horse"; "couple on an ox" and many others of impeccable poetry.