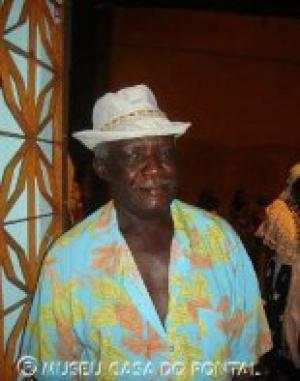 Abel Teixeira was born on 19 November 1939, in the village of Santo Inacio, municipality of Viana, in the Maranhão plain. He was involved with activities of the ox festival bumba-meu-boi since he was a child. In his youth he began to play the role of the masked Cazumba in the festival. He became artisan of masks worn by this character, making the so-called Cazumba faces. In 1978 he moved to São Luis, capital of Maranhão. He began playing the role of Cazumba in the Boi da Floresta group [forest ox] and continued producing masks. He sold them to the ox players and to other fans of his work. His masks with their unmistakable style can be found in different museums in Brazil and worldwide. In Brazil, they belong to the following museum collections: Edison Carneiro Folklore Museum (RJ), Casa do Pontal Museum (RJ) and Afro-Brazilian Museum (SP). His “Careta” is also in the Bragança Mask Museum in Portugal. He became famous for his work, participating in temporary exhibitions, running workshops and lectures, and is the subject of studies and books. In 2009 he won the prize of “Master of Folk Culture” awarded by the Ministry of Culture.