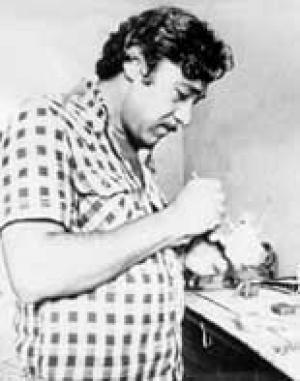 Adalton Fernandes Lopes was born in 1938 in Niterói, Rio de Janeiro State. Before working full-time with ceramics, he was a fisherman, a soldier in the military police, driver and employee of the coastal company of the Ministry of Transport. He had a fertile imagination and his work shows the sharp observation of day-to-day existence and worldly life. He works with a wide range of themes: from erotic art to the life of Christ, including street vendors, love scenes, weddings and birth. He was obsessed by the desire to “give life” to his characters, and created huge contraptions where hundreds of articulated figures move in animation. His figures are unmistakable and evidence his unique view of urban life. He died in November 2005.