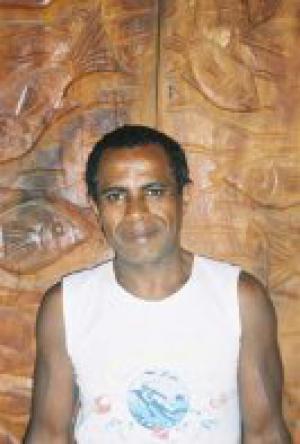 Celestino Gama da Silva, who signs his work Louco Filho, was born on 14 March 1966 in the municipality of Muritiba, Bahia. He was brought up in Cachoeira, historical town in the Reconcavo Baiano, where he lives and runs his studio. He is the son of Alice da Gama das Neves Silva and the famous sculptor Boaventura da Silva Filho, known as Louco (1929-1992), from whom he inherited the talent and nickname. He was very young when he began working, watching and giving the finishing touches to his father’s sculptures. He began his own work carving small figures, such as “miniature heads of Christ”. In his sculptures he adopted the same theme as his father, keeping carved areas in the scaled style invented by his father. His production is intense, vibrant and poetic.