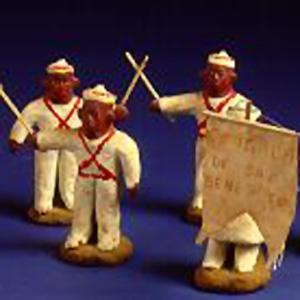 The congada is a religious folk dance and festival combining elements from black culture, such as the coronation of the kings of the Congo in churches devoted to Our Lady of the Rosary of Black Men. It also has processions and embassies, sections of dances and songs from the coronation, and the warrior dances in memory of Queen Ginga (from Angola), who died in 1663 fighting against the Portuguese. The congada has various versions depending on the region, with emphasis on one element or another. Although this version of its origin is not unanimous, it should be mentioned that the congadas were adopted by the black communities, which gave it the pattern and meaning that they have today. The dramatic scene called embassy is the most important part of this event, in which the reveller plays a key role: organizing masses, presentations and leading the dances, singing praise and asking for blessings from the Holy Spirit.