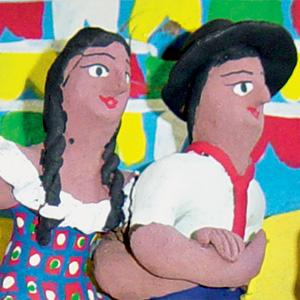 June festivities are included in the most important festive cycles in Brazil. They are held in honour of St. Peter, St. Anthony and St. John and the celebrations combine the profane and sacred in absolute harmony. The June festivities, as part of the most popular Christian festivals – until a few years ago were the most popular Catholic festivals in Brazil – have become progressively more secular. The festival rituals, however, are still linked to exalting fire, with dances around the bonfire, coloured balloons and square dancing. There is also a scene of a shotgun wedding, in which there is a vain attempt by the bridegroom to escape, his pursuit by the bride’s family members who reach him and force him to marry.