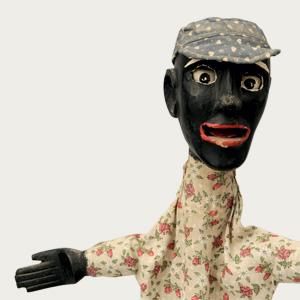 Type of folk theatre with puppets carved from wood and dressed in fabrics, manipulated by actors who hide behind the set consisting of a small raised stage. It is widespread in Brazil and each region has a different name for it, which sometimes coincides with the name of the main characters in the play. In Pernambuco, it is Mamulengo; in Rio Grande do Norte and Paraíba, João Redondo; in Minas Gerais, Briguela or João Minhoca; in Bahia, Mané Gostoso; and in Rio de Janeiro, São Paulo and Espírito Santo, may be called João Minhoca. The plays have simple scripts and very often may be piquant. The characters have salient features and gestures, tending toward the comical and exaggerated.