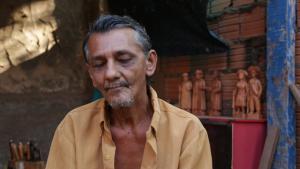 José Celestino da Silva was born in 1952 in Juazeiro do Norte, Ceará. Son and grandson of artisans, he grew up watching his father make shotguns and, very early, began to help him and his grandfather. Since it was hard to sell shotguns, the family began making bird whistles. After some time, José Ferreira da Silva – a new worker in his grandfather’s workshop from Pernambuco – began to make whistles in the shape of women. José Celestino quickly adopted the new style and went on to make erotic whistles. Then he began to work with a wide variety of themes in wood. He makes saints, folklore groups, details of festivities and figures with social content.