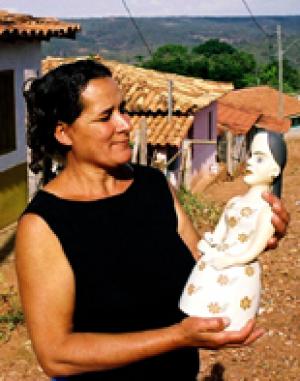 Maria Aparecida Gomes Xavier was born on 24 November 1958 in the vicinity of Campo Alegre, Turmalina, Minas Gerais State. She was still a child when she learned to model clay with her family, which worked producing earthenware and utility utensils. She studied until the third year of elementary school and when she was 16 years old she left school and began modelling figures to sell. She tried to make pots following the local tradition but was not successful. She found her form of art expression in making “figures” and through them adopted the profession of ceramist. She not only regarded work as a source of income but also “enjoyed it” and says that “work is good for the mind”. She shares the interest in clay modelling with her sisters, nephews and her only daughter, Adriana Gomes Xavier.