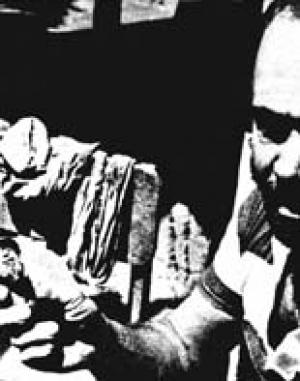 Selvino de Jesus Alves was born in 1941 in Rui Barbosa, Bahia State. He was very young when learned to work with clay on his own, making animals to play with. In 1976, after working in a service station and as a photographer, he adopted the trade of ceramist. When he became famous in this activity he was already living in Planaltina, a satellite town of Brasilia (Federal District). He developed a mixed technique of modelling, using little rolls or pellets of clay; he models the parts of the figures separately, joining them with clay slurry. The products are not polished and with decorative scratches, sometimes coloured with shoe dye. His figures vary in themes.