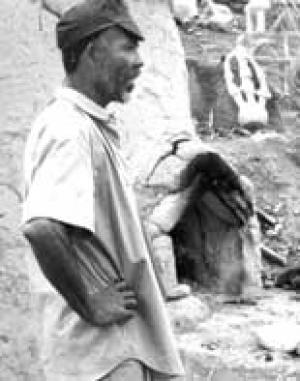 Ulisses Pereira Chaves was born in 1929 in a place called Corrego Santo Antonio, near Caraí in the Jequitinhonha Valley, Minas Gerais State. He was brought up in the pottery environment, continuing with the family activities and is outstanding in a region where figurative and utility pottery is mainly women’s work. As a child, he would model animals, such as cows and birds. In adulthood he would reinvent the traditional forms and his work was extremely personal: anthropomorphic and zoomorphic figures, fantastic creatures with several heads, birds with human feet and so on. Under his leadership, for a long time his eight children and wife Maria José ran their own artisan workshop. Ulisses is considered one of the most important ceramists in the Valley of Jequitinhonha. He died on 28 December 2006.