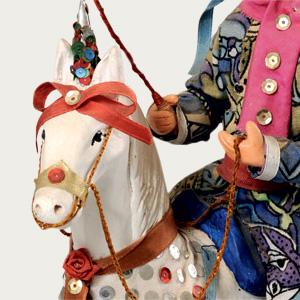 The cavalcade is a fairly old festival, probably of rural origin, designed mainly to show the skill of the horsemen in the hoop and other contests. Most often, the tournament between Moors and Christians, originating from the Middle Ages, recalls the battles fought under the command of the French Catholic King Charlemagne. Attired in special accoutrements and by means of games, dances and competitions, horsemen compete in a series of trials. Although the final result is known beforehand by everyone – the Christians always win – the competitions are taken seriously and each group does its utmost to obtain the best results. The most famous cavalcade in Brazil is held today in Pirenopolis (Goiás), and is widely disseminated as the game of twelve pairs, or the two-coloured drama, since the costumes of the Moors are blue and the Christians red.