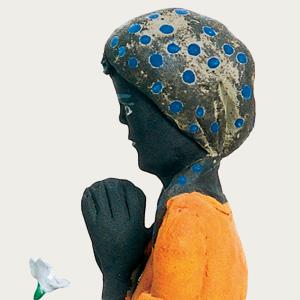 Although Catholicism is the dominant religion in Brazil, its traditions and liturgy have acquired new aspects among Brazilians from the contact of different cultures since the start of colonisation. The Catholic religion, adopted by the hegemonic class of Portuguese landowners, has been adapted quite uniquely, leading to the rise of religious syncretism in which the belief in Christian dogmas does not necessarily exclude faith in other creeds of African, indigenous or even European origin. In folk art the figures show very strong religious inspiration, with a large diversity of styles and aesthetic results. In addition to Catholic-inspired works there is a vast repertoire of work linked to umbanda, candomblé, their rituals and variants.